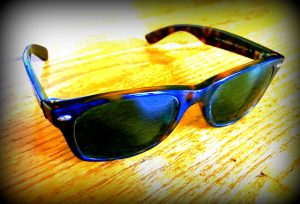 Today’s question is the same one we heard last week: Can you see Jesus?

Now on that same day, while two disciples were talking and discussing, Jesus himself came near and went with them, but their eyes were kept from recognizing him.

Maybe I’m the only one who finds that last verse interesting. …but their eyes were kept from recognizing him. For most of my life I understood that to mean God prevented them from seeing. But God does not prevent human beings from seeing the truth. As Jesus once said, “If you are truly my disciples, you will continue in my word, and you will know the truth, and the truth will make you free.” Truth-telling and restoring sight to the spiritually blind is at the heart of God’s love for you and me and all people!

In the Easter story we find people who cannot see Jesus—even those who are closest to him. There are two reasons for this: One reason is that they’re looking in the wrong place. To be specific, they’re stuck in the past and their own beliefs. They go to where they expect him to be: a tomb. Jesus isn’t there; that’s why they can’t see him.

The other example of not seeing Jesus is when he’s standing right in front of us but we fail to recognize him. This is the story in today’s reading from Luke.

In response to their spiritual blindness, Jesus says, Oh, how foolish you are, and slow of heart to believe all that the prophets have declared!

Now, if I were to ask you what your definition of a prophet is, a good response might be: “How do you spell that?” Is it “prophet” or “profit”? They’re not the same thing! Our lives are full of opportunities to discern whether we listen to and follow prophets…or, profits.

This past Wednesday was the 50th anniversary of Earth Day. In some ways, progress has been made in awareness of our world and the human impact on it. In other ways, spiritual people might hear with a twinge of painful recognition the voice of Jesus himself: Oh, how foolish you are, and slow of heart to believe all that the prophets have declared!

Many of the prophets in our own time are young people, such as climate activist Greta Thunberg of Sweden. (Read the April issue of National Geographic magazine to be inspired by many others.) These young people understand that Earth Day is not an annual observance. It is every day. These young people are the voices sounding climate change alarm bells to us grown-ups. Like the fearful, depressed, distracted, confused disciples in today’s reading, we grown-ups may be slow to hear the voice of Christ himself, saying: Oh, how foolish you are, and slow of heart to believe all that the prophets have declared!

Who we listen to shapes our hearts and minds. Listening to and following liars will keep us deaf to the truth. Listening to those who value profits over prophets will keep us blind to the Christ who lives and breathes and moves among us. True prophets do not tell us what we want to hear. Rather, they proclaim a truth that is often painful or inconvenient—even offensive–to hear, a truth that connects the dots between present actions and future consequences, demanding of its hearers a change in direction.

For example, we might be inclined to think of the deadly COVID-19 virus as “evil.” But a virus is not evil, in the sense that it doesn’t consciously set out to kill people. No, it’s just being a virus. Like all living things, it’s just trying to make a living, survive day to day, and reproduce. So, it does what viruses do, which happens to be not at all good for people.

In the same way, if we think of the Earth as a living thing, there are billions of tiny creatures called human beings that are not out to destroy the Earth. We’re just doing what people do: trying to make a living, survive day to day, and reproduce. So, we do what people do, which often happens to be not at all good for the Earth.

Comparing the human race to a virus, of course, is not likely to win a large audience. The difference, however, is that unlike a virus, we humans have hearts and minds, souls and spirits. We have eyes to see and ears to hear. We are not locked into “animal instincts.” We have many choices of how to live, some of which are virus-like and destroy the Earth, some of which do less of that. And, each day…we choose.

Oh, how foolish you are, and slow of heart to believe all that the prophets have declared.

If we read the Bible within the narrow confines of its original context, we will fail to see resurrection power for life application today. With spiritual eyes, we find that the stories and teachings of Jesus Christ are not some ancient tales to be dusted off once a week at church. They are nothing less than a timeless key to life itself. They are, in fact, a key to resurrection, full of power to help us to see ourselves and our place in the world today with clarity and purpose.

The Living Christ walks among us still, often unrecognized, connecting the dots between present choices and future consequences. Do we recognize the prophets among us? To what extent do we look for and follow truth? Are we listening to young people? It was, after all, God’s own child that was sent into the world God loves…to save the world.

Click the link at the bottom of this page, or, friend us at our "GoWithGrace.org" Facebook page. … END_OF_DOCUMENT_TOKEN_TO_BE_REPLACED