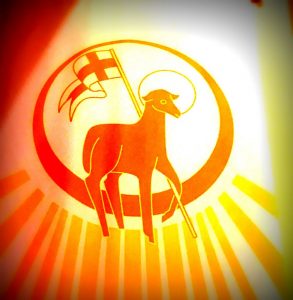 Easter banner in the church

You just heard this reading from the Book of Acts:

Awe came upon everyone, because many wonders and signs were being done by the apostles. All who believed were together and had all things in common; they would sell their possessions and goods, and distribute the proceeds to all, as any had need. Day by day, as they spent much time together in the temple, they broke bread at home and ate their food with glad and generous hearts, praising God.

Well, what do you think? How close is this description to your life experience, and what you see around you? Is it even believable?

This description of the early Church may be a tough pill to swallow. I was talking with a friend this past week about this passage, and he was deeply skeptical that it ever even happened like that.

Not surprising. Those of us who have more than enough food to eat and no experience of grinding poverty or life-threatening persecution are unlikely to have experienced the lavish, extravagant generosity described in this reading. But maybe, while traveling overseas you’ve been invited into the home of a poor family and offered a meal the family can’t afford. It happens because the host of that meal is part of a community that will in turn provide for them. All who believed were together and had all things in common.

No, this description is not some fantasy. It happens around the world every day. Deep compassion and extravagant generosity—wherever they are found–are evidence of nothing less than the presence of the living Christ, and the power of God.

Traditionally, this fourth Sunday in the Easter season is called Good Shepherd Sunday, based on the reading from John we just heard read: The sheep hear the shepherd’s voice. He calls his own sheep by name and leads them out. When he has brought out all his own, he goes ahead of them, and the sheep follow him…because they know his voice. They will not follow a stranger, but they will run from him because they do not know the voice of strangers.

Do we recognize Jesus? The first Christians did! They devoted themselves to the apostles’ teaching and fellowship, to the breaking of bread and the prayers.

All who believed were together and had all things in common; they would sell their possessions and goods and distribute the proceeds to all, as any had need.

Each of us is shaped and formed by various influences over the course of a lifetime. Some of the most powerful influences are national or cultural values, even when they bear little resemblance to the example and teaching of Jesus. “All things in common”? “Selling possessions and distributing to all who had need”? Suggest that in our time and place and you’re likely to be labeled a “socialist!”

The voice of the Good Shepherd is frequently drowned out in our time by the voices of nationalism. Or, voices that ignore compassion but trumpet constitutional rights, individual liberties, and unfettered capitalism. Such priorities may even be dressed up in religious language. They are, however, a far cry from the all-inclusive grace of God grounded in forgiveness, mercy and love, given to us in the example and teaching of Jesus himself.

As we walk through this COVID-19 season together, we acknowledge the fear, the grief, and the loss that are a part of this journey. This morning’s paper features Raymond Lee, a man who has lost his mother and two sisters to the virus—this, after losing his 20 year-old daughter to depression two years ago. We acknowledge, as well, the hardship experienced by many who, for the common good, are asked not to work.

Those who recognize the Good Shepherd might also acknowledge that these weeks and months are a window of opportunity. This is an opportunity to recover deep gratitude. Until now, for example, we have often taken for granted the opportunity to be together. “Should I go or not go? Maybe not. There’s always next time”—we might say. In the absence of such precious choices today, in what ways might we reorder our lives? How might hearts and minds be transformed to recover at least a glimpse of the living Christ in a way that is not temporary but continues beyond this virus season? These weeks and months are a window of opportunity!

Notice in the story from Acts that awe came upon everyone, in response to signs and wonders. These days we read about boredom being a problem for folks who find fewer options than we’re used to. Boredom is not normally a problem for folks whose souls are tuned to the signs and wonders of God all around us. I don’t just mean just in the natural world—there are plenty of those just outside this door!–but also in the world of human relationships. Last week, I mentioned England’s Captain Tom Moore, whose fundraising for national health services is now at $39 million, and on his 100th birthday this past week was promoted from Captain to Colonel. Signs and wonders. The living Christ shows up!

Signs and wonders are closer to home, as well. Do you see them? What does “awe” look like in your life?

The Good Shepherd is the one who leads the sheep. The sheep recognize the shepherd’s voice…and follow. There’s more: As the psalm-writer puts it: As we follow the Good Shepherd, “goodness and mercy shall follow us all the days of our lives, and we will dwell in the house of the Lord forever!”

Click the link at the bottom of this page, or, friend us at our "GoWithGrace.org" Facebook page. … END_OF_DOCUMENT_TOKEN_TO_BE_REPLACED