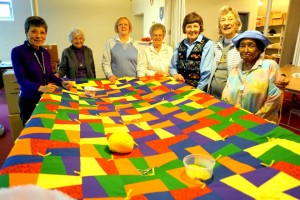 In the week before Halloween we’ve come to expect TV programs related to Halloween: stories about mummies, zombies, and ghosts. Some of these are not just entertainment but history: the Salem witch trials in Massachusetts, the Halloween Eve War of the Worlds radio program in 1938. One of these history programs this past week was Secrets of the Dead: Vampire Legend.

Turns out that 800 years ago in parts of Europe people had reason to believe in vampires! In those days people were dying in droves from tuberculosis, bubonic plague and other deadly diseases. Opening graves of the deceased, they found corpses with stomachs bloated and blood around the mouth. Ignorant of the science of decomposition, they concluded that people who had recently died had returned from the dead and were killing off the living by drinking their blood.

Their remedy was to dig up corpses of people they suspected and chop off their heads or break their legs to make sure the dead stayed in the grave. Now, there’s a Halloween story!

This sounds disgusting, primitive, barbaric to us. But it was actually seen almost as an act of compassion. It was believed that those who were coming back from the dead were not accepting their own death and were therefore having a hard time moving into the next life. Chopping off their heads and breaking their legs were attempts to help the dead move forward.

Ghosts, vampires, mummies, zombies. These creatures that are such an important part of our popular culture are all examples of the “undead”—creatures who are neither fully dead nor fully alive.

Lazarus was no zombie! Leading up to today’s reading from John’s gospel, Jesus himself says so: Lazarus is dead. It had been four days since Lazarus had been put in the tomb, and Jesus was late. If you’d been here, the dead man’s sister Mary says, my brother would not have died. And then, in one of the most tender moments in all of scripture, Jesus joins his friends in their grief and begins to weep.

The bad news in this story is that Lazarus died. The good news in this story is that…Lazarus died. Only the dead can be resurrected! There’s a lot those ancient Europeans didn’t understand about the science of disease and death and they were mistaken in their belief about vampires. But one thing they got right: Only the dead can be resurrected to new life.

Lazarus’ other sister Martha is troubled by Jesus’ command. Take away the stone, he says. Martha replies, Lord, already there is a stench because he has been dead four days. But Jesus is not afraid of death. He’s not afraid of the stench of death!

Every one of us has a rotting corpse taking up space in the tomb of our hearts. There is something in each of us that is neither dead nor alive, that refuses to die.

This past week I met Pastor Paul, the new pastor at Roots of the Table, a congregation that gathers at Luther’s Table. Pr. Paul just finished his seminary internship in the nation of Slovakia. He spent a year teaching seminary and high school students. I said to him, That must have been interesting being in Europe during this whole refugee crisis.

Paul said, Well, that was ramping up just as I was leaving, but I will tell you that I was very troubled by my high school students, he said. They were smart. Their English was excellent, and we could talk about anything. But when it came to talking about outsiders, these young people wanted nothing to with them. They like their white little country just the way it is.

The stench of death is everywhere, and often appears in our day as the stench of nationalism. When a person’s Slovakian identity, American identity, or Russian identity becomes the most important thing, we become the spiritual undead, rotting corpses walking the Earth, unable to be resurrected, because where there is no death there can be no new life.

I am hopeful for those young students in Slovakia. I am hopeful that Pr. Paul planted a seed among them that will lead them eventually to confront the rotting corpses in their hearts, to allow their beliefs to die, making way for resurrection.

Disciples of Jesus learn from Jesus’ example. He was not afraid of death, not afraid of the tomb, not afraid of the stench of death. Roll away the stone, he said. When we likewise allow the stone to be rolled away, to confront the corpse(s) in our hearts, and ask Jesus to put them to rest, then there is the possibility of resurrection, of new life. Now. In this world!

The stench of death is everywhere in our world. It’s in our hearts, too. But for disciples of Jesus there’s more than naming the stench of death wherever we see it. Our job is to hold before the world a vision of God’s realm on Earth. The Book of Revelation speaks of a “new heaven and a new Earth.” The prophet Isaiah speaks of a God for all peoples, all nations, all faces, all the earth.” Our job as disciples of Jesus is to point to signs of resurrection, wherever we see them.

One sign of resurrection I saw this past week is pictured on your bulletin cover this morning. Our quilters gather twice a month, as many of you know, and recently shipped another 47 quilts to bless the lives of people across the globe. Now, over the past year they’ve stepped up their ministry. Earlier this year they contributed a quilt to Valley Cities Mental Health in Renton. More recently, they were asked if they would donate a quilt to the Open Door Ministries auction this coming Saturday. And there you see it—a beautiful rainbow of color!

Now, Open Door Ministries is our local Lutheran ministry among the LGBTQI community. I’m guessing that none of the quilters you see was encouraged growing up to love and affirm gay and lesbian people. But here those quilters are, whatever their backgrounds, saying yes to a request to be God’s hands and God’s feet to people who are hungry for love. Some kind of spiritual death has taken place in these quilters, giving up old habits of thinking, making way for resurrection in their hearts—for new life!

God wants us, dead…or alive. But not undead! As St. Paul wrote to the Romans, If we live, we live to the Lord; if we die, we die to the Lord. So, then, whether we live or whether we die we are the Lord’s! Jesus is in the resurrection business!

On this day we remember the communion of saints, of which we are part. On this All Saints Sunday we remember that Christ is constantly stretching our definitions of “all,” until all have been resurrected to new life.

Click the link at the bottom of this page, or, friend us at our "GoWithGrace.org" Facebook page. … END_OF_DOCUMENT_TOKEN_TO_BE_REPLACED