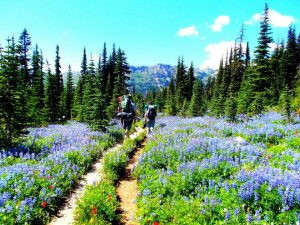 Years ago my wife and I went on a hike in an area south of here called Indian Heaven Wilderness. This is a beautiful, remote area in south-central Washington near Mt. Adams, and we decided at one point to drive on a forest road through the wilderness to see where that would take us. Well, we thought we knew where we were but there were no road signs and after a while we knew we were lost. It was getting late in the day and we were getting worried. Finally, we came to a road that did have signs and were greatly relieved to make our way safely out.

An angel of the Lord said to Philip, “Get up and go toward the south to the road that goes down from Jerusalem to Gaza.” (This is a wilderness road.)

Travel on a wilderness road, as my wife and I found out in our own small way, is risky business. Food and water can be scarce. Maybe wild animals along the way. In Philip’s day, bandits would have been common. And Philip might have been concerned about any of these threats, but he was surely not prepared for what he found on that wilderness road: a black man riding in a chariot. Turns out that he was no ordinary man, either. He was a eunuch, returning to his Ethiopian homeland where he was a man of power and influence.

So, here’s an interesting situation. On the wilderness road two unlikely characters meet: Philip, who is more or less a nobody, is nevertheless on his home turf. The Ethiopian eunuch is not on his home turf. He is black, he is a foreigner, and he is a sexual minority, which further makes him an outsider. Oh, one more thing: we soon learn that the Ethiopian eunuch needs Philip in order to understand the scriptures he is reading. Who in this story would you say is the insider and who is the outsider?

At this point in the story Philip again hears the voice of God: Go over to this chariot and join it, the voice says. And, once again, Philip obeys.

Last Sunday—Earth Day, Good Shepherd Sunday—we heard stories that affirmed the goodness of natural rhythms. Going through life at walking pace. Moving slowly enough to hear the voice of God. Slow enough to move in response to the promptings of the Holy Spirit.

Maybe that’s what’s going on here. Walking slowly, Philip hears the voice of God and follows instructions to take the wilderness road. He greets the man in the chariot, and the Ethiopian invites Philip to sit by him. Their conversation starts with the prophet Isaiah and ends with Philip telling his new friend about God’s love for all people through Jesus, a love that is affirmed through baptism.

And then, on the wilderness road, a coincidence—some might say a miracle: Out in the desert, where water is scarce, as they are discussing baptism, the Ethiopian looks out, and what does he see? “Look, here is water!” he exclaims. And then, he asks a question that is at the heart of this story: What is to prevent me from being baptized?

“What is to prevent me from being baptized?” Well, in the two thousand years since, Christians have found plenty of ways to prevent people from being baptized. We may not say, “You can’t be baptized!” But we do prevent people from wanting to be baptized when our attitudes and actions don’t line up with the point of baptism, which is simply this: the public affirmation of God’s unconditional love for all people.

Beloved, let us love one another, because love is from God; everyone who loves is born of God and knows God. Whoever does not love does not know God, for God is love…Beloved, since God loved us so much, we also ought to love one another…If we love one another, God lives in us and his love is perfected in us.

This is the love that followers of Jesus profess. God’s love is not merely love for our friends and our own kind. No, God’s love, as Jesus taught, is for those whom we would not love if it were left only up to us.

The Ethiopian represents all three of these demographics—race, sexuality, nation of birth, all of which represent stubborn and persistent American stumbling blocks. There’s not been a lot of love in our land for people who happen to be part of any of these groups, up until the present, including among Christians.

Sometimes it makes headlines. Maybe you heard about the public relations disaster that Starbucks faced a couple of weeks ago. Two black men waiting for a friend outside a Philadelphia Starbucks were arrested, following a complaint from the Starbucks manager.

What was truly amazing, though, was what Starbucks did immediately afterward. They not only apologized but closed all their stores for a day to train their employees about how to avoid implicit racial bias. Columnist Leonard Pitts wrote a column that appeared in the Seattle Times, praising the company. “Ultimately,” he writes, “this is not a Starbucks problem, but an American problem. And until we face it, the next public-relations disaster—or tragedy—is always just around the corner.”

What is it that has kept folk—especially white folk–in our nation stuck for centuries in patterns of oppression toward people on the basis of race, or sexuality, or nation of birth? Our scriptures have an answer for that: Always, it’s fear that is the primary enemy of love. Hear again our reading from 1 John: There is no fear in love, but perfect love casts out fear…and whoever fears has not reached perfection in love.

On the wilderness road, Philip heard the voice of God. He wasn’t blinded and burdened by centuries of cultural habits, human rules and church doctrines.

Click the link at the bottom of this page, or, friend us at our "GoWithGrace.org" Facebook page. … END_OF_DOCUMENT_TOKEN_TO_BE_REPLACED