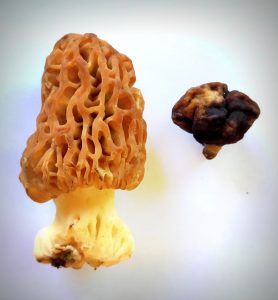 Last week a friend of mine asked if I wanted to go mushroom hunting. He’d asked before and it hadn’t worked out but this time I was able to say yes, so yesterday—in separate cars, appropriately self-distanced–away we went!

Steve has been doing this every spring for twenty-five years. Needless to say, he knows where to look for mushrooms!

Now, I’d thought I was prepared. I’d watched YouTube videos and read online articles about how to hunt mushrooms. Well, yesterday we drove to the site and went our separate ways. Soon, Steve had a bunch, and I had…none! I learned through this experience that I could watch YouTube videos until I was blue in the face, but there is no substitute for experience!

As you probably know, in the mushroom world it’s really easy to get it wrong. There are many mushroom look-alikes and failing to identity correctly can be fatal.

What we were looking for was morel mushrooms. There are at least five different kinds of morels, all of which are considered delicacies. But there are also varieties called false morels because they look somewhat like morels. If you eat them you won’t die but you’ll probably get sick.

As I was searching for mushrooms yesterday I was thinking about morels and false morels, but I was also thinking about today’s readings, which led me to wonder about “morals” and “false morals.”

In today’s reading from Acts a man named Stephen is stoned. We’re not talking about cannabis here! “Stoned” in this story means having rocks hurled at you until you die. In the days of Jesus this was considered an acceptable form of punishment.

So, we have to assume that Stephen must have been a very bad person, right? A murderer. A rapist. A child molester. But no, Stephen was none of these things. What he did was publicly proclaim that Jesus is God in human form. That’s why he was stoned to death.

Did I mention that these were religious people who killed Stephen?

You’ve no doubt heard news stories over the past weeks about people who become enraged when asked to wear face masks for the safety, well-being, and simple consideration of other people. Some are reported even to have threatened gun violence because they believe their constitutional rights are being violated.

When individual freedoms are used as an excuse to defend selfish indifference to other people, you know you’ve found “false morals.”

I was talking about this with another friend this past week and his response was very gracious. He said, “You know, I think most people try to rise to what they consider their highest value. Some people believe that their own individual rights are the highest value.”

I believe there’s truth in that. And yet, it’s all the more reason for followers of Jesus to be as clear and outspoken as possible about what we believe to be the highest value: God’s love, revealed in the life and example of Jesus the Christ, so that we might embody that same love for the world.

The difference between morels and false morels is a big difference, but eating a false morel probably won’t lead to death.

The difference between morals and false morals is also a lot, but the stakes are much higher: Choosing false morals can very likely lead to the suffering and even death of others. That’s the story of Stephen.

Well, how to tell the difference? In today’s reading from John, Jesus is at the point of exasperation with his followers. Have I been with you all this time and you still don’t get it? The love of God is what you see in my love for you and for the world. This is what you are to learn from and imitate by following me!

The first part of yesterday’s mushroom hunt was a disappointment. I did find three morels, but meanwhile Steve had found three…dozen! Well, we drove to a different site, and this time instead of going my own way I followed him. And guess what? I found morels! I ended up going home with sixteen—not bad for a rookie! Now, Steve didn’t show me the morels. I simply followed his general direction and sought to imitate him. And, it needs to be said that just putting in the extra time was essential. It made all the difference!

Friends, here’s the deal with this thing we call church. We try to follow the leader. (Last Sunday it was the Good Shepherd, this Sunday it’s the Good Mushroom Hunter!) Lots of times we mess up and go our own way. We choose false morals, putting work, or money, or Trump, or religious doctrine, or the Constitution, or racial privilege–or really anything you can think of before love of God.

Jesus taught that our love of God is measured by our love of others. All others. Refusal to accept this deep truth is to get “lost in the woods” of fear and self-interest.

Morels. False morels. It can be confusing for beginners to tell the difference. To the experienced mushroom hunter, however, there’s no comparison. Morals. False morals. In our fear and confusion, cheap imitations are too often the things we settle for. So many distractions to the love of God!

By way of contrast, in today’s reading from John, listen again to this astonishing promise from Jesus himself, the one who embodied God’s love for us to imitate: the one who believes in me will also do the works that I do and, in fact, will do greater works than these.

Greater works than these? Greater love than Jesus? Yes, dear friends, to the extent that we recognize the living Christ who has been with us all this time, right in front of us, in friend or foe. Each of us, through our often vast personal and social media networks, through our travel mobility and technology, have many more opportunities in our lives than Jesus did to touch lives with the love of God. We follow the leader, imitate his example, put in the time.

What if, on this Mother’s Day, we were to reflect on the deep love of our Creator for us, hinted at in the love of a mother for her child? What if we were to learn from that example, and in the days and weeks ahead find ways of applying that kind of love not just to our own but to those outside our circles? Maybe in small ways. Maybe in daring ways. Maybe even in “impossible” ways, like Stephen’s forgiveness of his murderers.

A mother’s love is a great example to begin with and learn from! It is a starting point for practicing the true, the genuine, the deep, the unconditional love of Christ for all people that we are called to imitate and follow.

Click the link at the bottom of this page, or, friend us at our "GoWithGrace.org" Facebook page. … END_OF_DOCUMENT_TOKEN_TO_BE_REPLACED