What we notice is that these endings and beginnings don’t typically move in a straight line. These are seasons and cycles that happen over and over again!

Today’s reading from Matthew is a story of seasons and cycles. A powerful man is at home, preparing for a long journey, after which he plans to return home. He entrusts three of his servants with his money, and notice that they are all treated equally. They receive different amounts, but each one according to his ability; it’s a level playing field!

In the end, one of these fails to live up to his master’s expectations, and the reason is fear: “I was afraid,” he says. Last week in class one of you noticed that Jesus, time and again, says to his followers, “Don’t be afraid.” We all experience fear; it’s part of life! But to be a disciple of Jesus means understanding that we don’t have to organize our lives according to our fears. God is bigger than our fears.

As Jesus’ story demonstrates, fear can lead us as individuals and as communities to become smaller than we are. Fear can dampen our courage and imagination.

I’d like to share with you this morning a vision that is imaginative, courageous, and I believe, above all, faithful.

It’s a vision that starts with a man who died almost eight years ago. 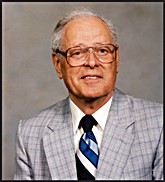 Walter Cook was married to Bessie Cook for 14 years. Walt was not a church-going kind of guy. I sometimes went out to the parking lot after worship to greet him and found him dozing in the car, waiting to pick up Bessie. But one thing Walt was, was young at heart. He died at age 94 but up until the last years of his life he was still working for Boeing. One of his great sources of pride was a part he designed for the 787 Dreamliner. Walt’s life was not marked by fear. It was marked by creativity, imagination, and energy.

In the spirit of Walt’s willingness to try new things, at his memorial service I decided to honor his God-given gifts by projecting on the wall an image of the Dreamliner just as I’m doing now. Hadn’t tried that before, but in the years since Bessie has mentioned with gratitude any number of times that Dreamliner on the wall.

One of the things I experience at memorial services such as Walter Cook’s is that people show up who haven’t been here in decades. Maybe they were baptized or confirmed here and moved away but one comment I hear over and over is, “This place hasn’t changed at all!” Well, it’s not true; this congregation has changed a lot over the years, but what they mean is that the worship space looks exactly the same. And that is true!

Eight years after Walter Cook’s service, I don’t think I’ve tried this wall projection since, and the furniture remains where it always has. But this past week, following a meeting in Bothell, on my way home, I decided at the last minute to stop in Kirkland at a new church called Salt House. Salt House meets in what for many years had been Trinity Lutheran Church. Trinity Lutheran declined in numbers over the years and eventually closed its doors. But in this traditional worship space a remarkable thing has happened over the past couple of years. Pr. Sara Wolbrecht is a gifted young pastor leading the Salt House congregation to experiment with new ways of doing worship.

Part of this has involved rearranging the furniture. Instead of pews locked into place the church has some pews and also many chairs. Everything is flexible and has been shifted to make best use of the space.

Something similar has happened at Columbia City Church of Hope, just up the road. Years ago, Bethlehem Lutheran was unable to continue and closed their doors. But Church of Hope has moved the furniture around and is trying new things. 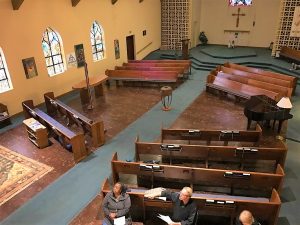 Both congregations are growing.

As I’ve thought about these two congregations this past week one question has occurred to me: Why does the furniture get re-arranged only after a congregation has closed its doors? What might happen if congregations overcame their fears and tried new things? Would they even need to close?

Bessie, Walter, Pr. Sara, Pr. Darla and their congregations; all these are folks who are using their God-given talents in creative and courageous ways and the blessings have been multiplied. There’s one more story I’d like to share and this is about someone you all know: Marissa, our music director. 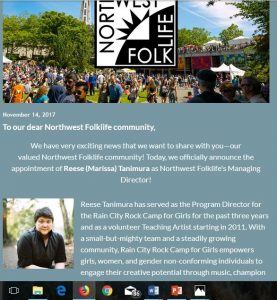 Marissa is not here today because she’s leaving this morning on a long, well-deserved trip. What you probably don’t know is that when she returns she will begin a new day job as managing director of the FolkLife Festival. This is a huge opportunity for her and a wonderful tribute to her many gifts.

You may have noticed over the past couple of weeks that Marissa has been working with Nathan and Alan to stream our worship service live. This is not something I asked her to do. She loves this congregation and wants to get the word out in the community and the world about who we are and what we’re about.

You might also have noticed that our worship space creates some pretty big challenges to her attempts to capture worship on camera. With pews fixed in place and such a large space it’s really hard to make it work online.

Marissa has other dreams for this congregation. She’d like to be able to hold community concerts here. Again, however, the challenge is flexibility. This is a wonderful space but musicians need more room up front to make it work.
• What if we could move things around when necessary to make room for concerts?
• What if we could use technology in a way that enhances worship, gives glory to God and doesn’t cost a lot of money?
• What if someone with mobility issues could walk in the door late during worship and not worry about everyone staring at them?

There’s one way to find out: Who among you will join me in experimenting with this space, not to permanently change it but to make it more flexible for worship and other uses. Talk to me. And the rest of you: If you come to worship some day and things don’t look the way they always have, how can you support those who are doing this good work?

This is a season of endings and new beginnings. Spiritual people know that this is true every day. For the changing times in which we live our reading from Thessalonians offers us both challenge and encouragement:

So then let us not fall asleep as others do, but let us keep awake and be sober; for those who sleep, sleep at night, and those who are drunk, get drunk at night. But since we belong to the day, let us be sober, and put on the breastplate of faith and love, and for a helmet the hope of salvation. For God has destined us not for wrath but for obtaining salvation through our Lord Jesus Christ, who died for us, so that whether we are awake or asleep we may live with him. Therefore encourage one another and build up each other…as indeed you are doing!

Click the link at the bottom of this page, or, friend us at our "GoWithGrace.org" Facebook page. … END_OF_DOCUMENT_TOKEN_TO_BE_REPLACED