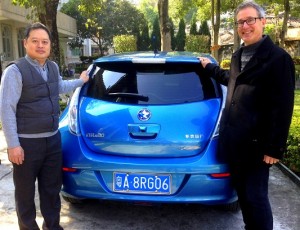 Three weeks ago yesterday, on February 6th, at 4:00 in the morning, my wife and I were awakened by windows rattling and the building shaking. I looked at her and she said, “Earthquake”, and…we both fell back asleep!

Maybe not the safest response to an earthquake (!) but the next morning we heard news that she was right. It was an earthquake—the same one you read about in the news–on the island of Taiwan, across the water 250 miles from her hometown. Since then we’ve learned that over 100 people died in that earthquake.

One day, people were talking to Jesus about tragedies in their own time. Some local folks had been killed by Pontius Pilate, and on another occasion a tower had collapsed, killing 18 people. But it wasn’t just these tragedies that held their interest. It was a question of cause and effect: Not just what happened but why did it happen? We have the same deep need that they had to make sense of our world, don’t we? We want to know why bad things happen.

Sometimes, we know, it’s just bad luck—being in the wrong place at the wrong time. But like the people of Jesus’ day, we are sorely tempted to make judgments about things we think we understand but don’t. We might not say it out loud, but in some situations we might find ourselves thinking, “Well, maybe they had it coming to them.”

One of the local tragedies in the news this past week was yet another shooting victim. Fourteen year-old Wesley Gennings apparently was planning to sell drugs to some friends, but these so-called friends decided to rob him instead so they shot him in the head and stole the drugs, and his phone, and his wallet.

Immediately we try to make sense of such a story, and rush to the usual answers: broken families, troubled youth, drug use. Actions have consequences, we say, and of course that’s true. And yet, although we might not quite say, “He had it coming to him,” we believe that the problem is somehow his fault—the people he hung out with, the choices he made.

In today’s reading Jesus asks his audience, Do you think those who died tragically were worse offenders than all the others living in Jerusalem? No, I tell you. BUT, he continues, unless you repent, you will all perish just as they did.

Now, there seems to be no connection between Jesus’ audience and the tragedies he describes, so what’s he talking about? How could ordinary people be at fault for Pontius Pilate’s actions? How could they take responsibility for a tower that fell?

But guilt, fault, and blame are not Jesus’ aim. Instead, the goal for each and every one is “repentance”–a very poor English translation of the original word–which means “a change of heart…which leads to opening one’s life to God…which fills us with a new direction and a new life.”

Unless you change direction, you will all perish just as they did. Apparently, the choices each of us individually make are connected to the lives of others in ways we can’t see or understand! Evidently, God’s story of salvation includes us and challenges each of us to step into the work of salvation for which we were created.

The power and value of one person became clearer to me on our recent visit to China. Three weeks ago today we were leaving the church after worship when all of a sudden I spotted a Nissan LEAF electric car in the parking lot—just like the one I drive—right there, off the beaten path, in China! I found the driver and asked him why he bought it. His reply: “God made the earth, humans are spoiling it, I’m trying to do my part to fix that.”

Six thousand three hundred miles from home I meet a Christian brother who is one of one billion fellow citizens, most of whom are not Christian. And yet, instead of becoming discouraged and cynical and convinced that one person doesn’t matter, he is full of hope: “Based on my Christian beliefs, I’m trying to do my part to save the world.”

If this guy, who has few of the economic, political and educational advantages that I have can do just as much as I’m doing, I have to ask what repentance looks like for me. In other words, having seen what he can do with his limited opportunities, how can I now change direction to set the bar higher for myself? Who is God calling me to be? How do we connect the dots between the ills of the world and our own choices that seem so far removed from the world’s problems?

When we hear the word “repent” we’re likely to think “guilt” and “shame.” But in the words of Jesus we find instead a belief in the great power and infinite value of one person. Unless you change direction, you will all perish just as they did. Individual choices lead to habits, and when those habits are multiplied by millions or even billions we find that one person really does make a difference!

There was an article this past week highlighting the power of one. Last year set a record in this country for number of miles driven. Cheap oil, you know! How many miles did Americans drive in 2015? Enough to make 337 round-trips…to Pluto! Multiplied by millions and billions, one person makes a big difference. Likewise, people who choose differently set an example for others to follow, which eventually can create a shift away from death toward life.

God’s story of salvation is not about us getting to heaven! It’s about the salvation of the world. So what are God’s ways and God’s thoughts? What are our ways and our thoughts? How much energy do we invest in our own need for transformed hearts and minds?

The season of Lent leads us deeper into these questions. In Jesus we find the power of one person to save the world. The one we follow believed in and followed the higher ways of God that Isaiah speaks of. We, Christ’s brothers and sisters, are called to follow his example in all the ordinary challenges and opportunities each day…for the salvation of the world!

Click the link at the bottom of this page, or, friend us at our "GoWithGrace.org" Facebook page. … END_OF_DOCUMENT_TOKEN_TO_BE_REPLACED