Each year our bishop invites the rostered leaders of our synod to spend two days on retreat. This year’s event took place earlier this past week.

At the end of each retreat day, the bishop invites us to what he calls a “hospitality room,” a place of conversation where there is beer, wine, sodas, snacks and other refreshments.

What do you think of when you think of hospitality? Maybe something similar–gathering with friends on your turf and providing refreshments over conversation?

Last Sunday we heard the story of Jesus’ friend Peter, who had a dream in which God showed him that God’s love is for all people. This week it’s Paul’s turn to learn the same lesson.

Like Peter, Paul has a vision that he takes to be a message from God. He travels from Turkey to Greece, where he meets a woman named Lydia. Lydia is an unusual woman. In a male-dominated world, she is a businesswoman in charge of her own household. She is a dealer in purple cloth, which was an expensive luxury item that only the elite could afford.

No doubt Lydia had worked hard for her place in society, trying not only to fit in but to succeed. Lydia traditionally is known as the first European convert to Christianity. How to “fit in” if you’re the first?

Think of that. Lydia, we’re told, was a “worshiper of God,” but what would her friends think of this new Christian religion? What about her business partners? Her clients?

Lydia might have had a lot to lose! But instead of playing it safe Lydia listens—“eagerly”!—to Paul. She and her entire household are baptized! And to top it all off, Lydia invites Paul and his male companions to stay at her house! This is not the easy hospitality of inviting friends over for coffee or a beer. This is risky—socially, economically, risky hospitality!

We at Lakeridge Lutheran work at hospitality. We put it in writing on our bulletin every Sunday. That’s important, and it’s a start. But we also know that words on a page are a lot easier than putting those words into practice!

Back at the Rostered Leaders Conference this past week: The topic for our retreat was Race and Privilege. Now, there’s been a lot of talk about race in the news and within communities, especially these past few years. And words are important. Conversation is important. But what does it look like for people with more power to practice “risky hospitality”—gospel hospitality—toward those with less power?

There’s a black folder in front of where you’re sitting. Pull that out and in it you will find a piece of paper titled, “The Cycle of Gospel Living.” This was one of the resources for our retreat this past week. It describes the life of Jesus and the example he set for us to follow.

It’s a fairly simple diagram. In the Cycle of Gospel Living those who enjoy more power step back from the privilege, power and control that they’re accustomed to. This allows those with less power to claim their voice and their God-given gifts. In Christian language we call this “death.” We also call it gospel hospitality. And notice what happens. As those with less power become empowered, those who had power also become empowered, but in a new and different way from what they were used to.

Where would Lydia be on this cycle? Notice the other sheet in your folder, titled “Historically Oppressed/Privileged Communities in the United States.” Despite being a woman, she was a person of some power, although economic power can create the illusion of equality. But because she was a woman, she had a lot to lose by not following the rules or expectations of society. (You know how this works in our society: If you’re a woman or a person of color you have to work twice, or five times, or ten times as hard as a white man to get equal pay or equal position.)

And yet, the story tells us, Lydia took the risk. “The Lord opened her heart to listen eagerly to what was said by Paul.” Lydia moved from being powerful and in control of everything to being vulnerable and open to the power of God, setting aside her instincts for control and self-preservation.

Paul, for his part, had long ago stepped back from the power he was accustomed to. Over and over he made choices that led to personal consequences. But through his willingness to trust God, Paul made room for the Holy Spirit. We can say that by stepping back from the privilege they were used to, both Lydia and Paul made room for the Holy Spirit to work.

This is what today’s reading from John points to when Jesus says, Those who love me will keep my word, and my Father will love them, and we will come to them and make our home with them. In other words, when we follow the Cycle of Gospel Living, we extend hospitality to none other than Christ himself!

So–we’re back to where we were last week. It’s all about love! When those with more power create space for those with less it is an act of love. Into such relationships God can enter and, as Jesus said, make a home with us. 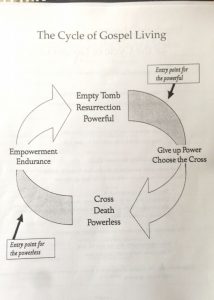 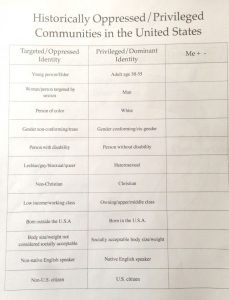 Click the link at the bottom of this page, or, friend us at our "GoWithGrace.org" Facebook page. … END_OF_DOCUMENT_TOKEN_TO_BE_REPLACED