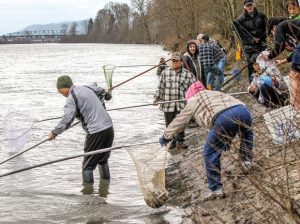 It was about this time of year probably 25 years ago that my wife and I heard about an opportunity to fish for smelt. I love to fish, and this sounded like a fun adventure, so one day we drove down to Castle Rock, Washington, to try our luck for Columbia River smelt on the Cowlitz River.

Now, the kind of fishing that I’d always done was the rod-and-reel method we use in lakes and rivers, the kind of fishing that involves deception and distraction. But this was different. It’s called smelt “dipping” because it involves standing on the riverbank, taking a dip net with a long handle, and scooping it through the water just a few feet from shore. If you’re lucky—and we were—you would catch these small fish, which we put in a meat smoker, and enjoyed eating them later.

This type of fishing would have been more familiar to Peter, Andrew, James and John. They didn’t use this kind of net, but, they were net fisherman. It was their livelihood.

One day, they were just doing their fisherman thing when Jesus walked by, saw them, and said, “Follow me.” As Matthew describes it, they just dropped everything—their nets, their boat, even poor dear old dad Zebedee—and followed him.

That’s always puzzled students of the Scriptures, including me. Who would do that—just drop everything, follow some itinerant preacher, with no assurance of security or even a positive outcome for this new direction?

I’m also intrigued by Jesus’ invitation. “Follow me, and I will make you fish for people.” I’ve always thought of that as anything from recruiting church members to evangelism, which is probably not too different from what many of us imagine.

But using our imaginations a bit more, I wonder if the Holy Spirit can deepen Jesus’ invitation to us.

This may not be as outlandish as it sounds. On other occasions Jesus said, “I am bread, I am Living Water, I am salt.” These are things we eat. At communion each Sunday, we hear these words: “This is my body…broken for you…to be consumed by you.” We consume this bread, this wine, this body, this blood.

“I will make you fish…for people.” In this interpretation, God—not we!–is the one who fishes, who casts the net. We are the fish who are caught.

Well, that begs all kinds of questions, one of which is: If God is the one who is fishing, what is this net? What is it that catches us? Well, it’s love. It’s God’s holy love, God’s “hole-y” love.

What’s a net without holes? It’s a solid sheet of fabric, not much good for catching fish. The thing about holes in the net is not only can water pass through it; it’s also true that if a fish is small enough it can escape. Just because God’s doing the fishing and just because the net God uses is love, doesn’t mean that fish can’t slip through it.

We’ve seen it in the impeachment trial, right? There hasn’t been much evidence in this Administration of love for truth, justice, facts, people, or the legal process itself. Contempt for these things? Yes! Love, as it turns out, is not the only net that catches people. Lust for power, greed, selfishness, fear, hate—these are all nets that can catch not just the movers and shakers, but any of us.

Some of us believe, however—and I am one of those—that God is a patient, tireless fisher. Just because some fish escape the net of God’s love, the Great Fisher casts the net again, and again, and again, never stopping until every last fish is caught.

“I will make you fish for people.” You and I are like fish out of water. We, the fish caught in the net of God’s love, are drawn out of what we think of as relatively safe, comfortable, life-giving and familiar, that we might be consumed by the world. This is the example of Jesus himself. Caught in the net of God’s love, he became food for a world hungry for love. We, who like those first disciples follow Jesus, become food for a world starving for love.

Well, maybe this sounds like a load of nonsense. And yet, dying for the sake of love, as food for a hungry world, is what our faith is all about. As St. Paul assures his Corinthian audience, …the message about the cross is foolishness to those who are perishing, but to us who are being saved it is the power of God.

It’s a powerful and even troubling image, isn’t it, that to be saved in the kin-dom of God is to lose one’s life for the sake of love.

On this RIC Sunday, we remember that losing one’s life means parting ways with what’s secure and familiar. For those four fishermen, that meant dropping their nets, disappointing their family and friends. Following the way of the cross may indeed include the loss of some of what is comfortable and familiar. It may mean parting ways with ideas that have formed and shaped us, even over the course of a lifetime. No more swimming in the waters of fear and prejudice. No more swimming in the waters of selfishness. That life is behind us. Drawn out of the water in the net of God’s love, we become love, food to be consumed by a world starving for love.

In the many years since that day we went smelt-dipping on the Cowlitz River, the fishery has declined. The smelt numbers aren’t what they were. Climate change? Pollution? Overfishing? Disease? No one knows for sure. In the kin-dom of God, however, there is no such decline. There are many more fish to be caught—millions, billions–in the net of God’s love. Some, at least for now, swim far from the net. But all who venture close to the Great Fisher will eventually get caught. Those who have been caught and lifted out of their safe and familiar habitat discover a deeper joy in learning what it means to die–in order to be consumed by a world starving for love.

Click the link at the bottom of this page, or, friend us at our "GoWithGrace.org" Facebook page. … END_OF_DOCUMENT_TOKEN_TO_BE_REPLACED