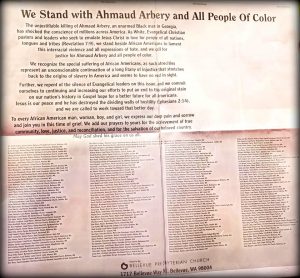 During ordinary times, many thousands of souls around the world every day say good-bye for the last time to close friends and family.  People die, their loved ones grieve.  Over the past three months many thousands more have experienced not only grief but trauma.  The COVID-19 virus has suddenly and unexpectedly separated many who are living with the virus from their loved ones.

Today’s story from Acts is the story of Jesus’ final departure from his human journey.  He’d assured them that he would continue to be with them through the Holy Spirit, but of course they didn’t fully understand what this meant.

Imagine their confusion:  First he’s executed—tortured–by the State, and with the blessing of the religious establishment.  Three days later they see him alive.  Then, soon after, before their very eyes he disappears for good.

The confusion, fear, and loss that these friends experience resonates with many of us.  But there’s more: their experience so many centuries ago can help show us a way forward in our own circumstances.

The best spiritual stories don’t usually tie things up in a neat bow.  Often, they raise as many questions as they answer.  The spiritual life is a mystery!  In today’s reading, for example, “two men in white robes” appear.  Who are they?  Well, religious people would probably answer “angels,” and that’s as good an answer as any.  The word “angel” means, simply, “messenger” and these are clearly messengers of God.

Men of Galilee, why do you stand looking up toward heaven? This Jesus, who has been taken up from you into heaven, will come in the same way as you saw him go into heaven.

“Why do you stand looking up toward heaven?”  It’s a question that challenges all of us who describe ourselves as “religious.”  It’s been said that Christians are often “so heavenly minded that they’re no earthly good.”  This is sometimes a fair judgment.  Caught up in beliefs and rituals and traditions, we forget what the life of faith is all about.  Preoccupied with the life to come, we sometimes forget that to be spiritual is not to be off in the clouds but grounded in the challenges and opportunities of this life on this earth.

There’s another trap we religious folk easily slip into, and in today’s story it’s at the heart of a question Jesus’ disciples ask:  Lord, is this the time when you will restore the kingdom to Israel?

After centuries of occupation and subservience to foreign empires, central to the hope of religious faith in Jesus’ time was political freedom.  This, in fact, was their definition of salvation.  Who could blame them?  But, even after spending two to three years with Jesus and hearing his teachings, their understanding of salvation had barely budged; they still clung to their longing for national power and glory.

Last week we experienced the very human Jesus at the point of exasperation:  “Have I been with you all this time and you still don’t understand??”  But this week there’s none of that.  This is, after all, a “final” departure.  Instead of criticizing them, he simply changes the direction of the conversation.  It is not for you to know the times or periods that the Father has set by his own authority. But you will receive power when the Holy Spirit has come upon you; and you will be my witnesses in Jerusalem, in all Judea and Samaria, and to the ends of the earth.

“Lord, is this the time when you will restore the kingdom to Israel?” Or, “Make America Great Again”—it’s a similar question and the same longing in our own time.  As in Jesus’ time, anxious people today also fear losing power and grasp at what they believe will save them.  As in Jesus’ time, that something is often some glorious vision of the past, or someone who promises a return to the past.  But the vision of God’s salvation is infinitely greater than either our dreams of national glory or heavenly paradise.

Here’s what’s remarkable about the confession of Pacific NW conservative church leaders that appeared in the Seattle Times this week:

In this public confession, these leaders set aside all those familiar longings for power and glory.  This provides a glimpse of what the best of Christian faith looks like in our time.  These church leaders focus not on national glory but on the unjust killing of a young black man, and not just one black man:  We stand with Ahmaud Arbery and All People of Color.

Racism is our national sin.  It’s like a heroin habit that we can’t seem to kick, but which is killing us—all of us.  So, what’s most remarkable to me is the timing of this confession.  It would be far easier not to address racism in the midst of a pandemic.  It would be far easier to focus on the virus, to call religious people to pray for a vaccine, and to pray for health care workers.

These prayers, of course, are important!  But, we white religious people have always found some reason—some excuse–not to publicly denounce racism, not to take responsibility for our silence and complicity.

Lord, is this the time when you will restore the kingdom to Israel?  God, help us make America great again–because that’s a whole lot easier to talk about than doing the work of love for all people that you have commanded us to do.

Eternal life, as we just heard from Jesus’ own lips, is not primarily about paradise in the afterlife.  Eternal life is unity with God, which is our goal in this life.  We move toward unity with God by learning from and imitating God’s love towards all, including Ahmaud Arbery, and countless other victims of race-based injustice, hatred and violence.

At Jesus’ ascension, his followers received hints of God’s vision and the vastness of God’s love.  Next Sunday we hear again the story of Pentecost, when that vision of unity is revealed in power and glory.

In the meantime, I will continue to be awed by hints of Pentecost.  I will be encouraged and challenged, for example, by brothers and sisters in the Pacific Northwest who seem less distracted by dreams of national greatness, dreams of heavenly glory, by rules, doctrines and traditions—and instead strive to focus on the only thing in the end that matters:  loving others as Christ first loved all people!

Click the link at the bottom of this page, or, friend us at our "GoWithGrace.org" Facebook page. … END_OF_DOCUMENT_TOKEN_TO_BE_REPLACED