Having returned from a recent trip to visit family in Australia, Pr. Scott offers reflections on highlights of the experience in light of the season of Lent. 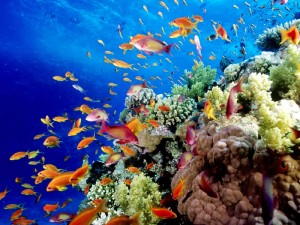 One of my “bucket list” goals over the years has been to see the Great Barrier Reef. It’s being affected by climate change so the voices of some observers have taken on a see-it-before-it’s-gone urgency.

While in the northern coastal city of Cairns my wife and I took a day trip to a nearby island. There we escaped the summer crowds and spent hours snorkeling over diverse coral communities and the many varieties of brightly-colored fish that inhabit them. The next day she stayed behind as I joined a commercial diving/snorkeling trip to the outer reef. There I gaped at coral towers, green turtles, sharks, giant clams, sea cucumbers and countless fish great and small, including the giant Maori wrasse.

During these two snorkeling adventures I experienced heightened awareness. My senses felt fully engaged, not wanting to miss or forget any detail. Snorkels amplify the sound of one’s breathing so I became acutely conscious of my own breath. I found myself frequently stopping, suspended over some natural marvel, breathing slowly, regularly, deeply. That in turn deepened my sense of peace, wonder, and gratitude for the chance to be part of it all.

As I reflect on those experiences I realize how unaware of my breath I am most of the time. When I do pay attention, I’m struck by how shallowly I breathe. Sometimes when I’m worried or distracted I wonder if I’m breathing at all. In those moments I also see how little attention I’m paying to the world around me.

That’s a shame, for the land-based world we take for granted is no less spectacular than the world below the waves. I’m convinced that heightened awareness—with the awe and wonder that accompany it—follow intentional spiritual practice, which can be as simple as daily making time to pay attention to one’s breath.

Meditation is one word for it, practiced and encouraged by all the great world religions, including our own. Confronted by countless daily distractions and an endless “to-do” list it can be a challenge to make time. But to the extent that we do we might be surprised by a restored sense of peace and wonder, not only in ourselves but among those who daily cross our paths.

Click the link at the bottom of this page, or, friend us at our "GoWithGrace.org" Facebook page. … END_OF_DOCUMENT_TOKEN_TO_BE_REPLACED