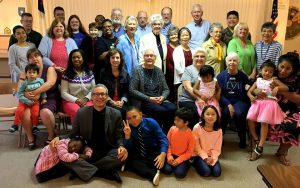 I have found that the best way to make time pass quickly on a 13-hr. flight between Seattle and China is to watch movies. That’s mostly what I do, and over the past two weeks on two flights I watched a total of at least eight movies. Some were pretty good; some, not so much.

Have you ever seen a movie that was so good that you just had to tell others about it? I remember lots of powerful movies; for my generation, the original Star Wars trilogy was probably the greatest example. How many millions of times did people say, “You’ve gotta see this movie!” But, maybe you’re not into movies. Think of an experience that was powerful or moving or so amazing that no amount of talking about it or explaining was good enough. You had to be there; you had to see it!

One day Jesus decided to go to Galilee. He found Philip and said to him, “Follow me.” Now Philip was from Bethsaida, the city of Andrew and Peter. Philip found Nathanael and said to him, “We have found him about whom Moses in the law and also the prophets wrote, Jesus son of Joseph from Nazareth.” Nathanael said to him, “Can anything good come out of Nazareth?” Philip said to him, “Come and see.”

Come and see.” Everybody knew that Nazareth was just a little Podunk town, so Nathanael was naturally skeptical about Philip’s claim. “Can anything good come out of Nazareth? Philip knew that no amount of explaining or persuasion would do the trick. “Come and see.”

One of the things I did while I was in China was clean up files on my computer, which included organizing photos from the past year. One of my favorites from last year is a group photo of those who were at coffee hour on September 17th for a farewell to Theresa Berg. You have it in front of you. It’s a photo that makes me smile.

In a time when financial and sexual scandals within the church make headlines, is it any wonder that many people ask, “Can anything good come from the church? If someone says to me, “What good is the church? Why bother?” I can say from personal experience, “Come and see.” I can show them the photo, of course, of all these wonderful people and that’s worth a lot, but there’s nothing like seeing in person. “Come and see.”

Come and see that we are male and female, gay and straight, older and younger, higher income and lower income, black and white and brown and yellow. There’s a lot to love about Lakeridge Lutheran Church. There’s a lot to be grateful for what God is doing in this place!

This isn’t just hype. It’s not just “feeling good about ourselves.” It’s true, it’s good, and now—more than ever—it is vital for the world to know exactly who Christians are and what we believe and what we represent. It’s vital that people know who we are, because our society and world have a really hard time getting it right. The lead story in this morning’s paper, for example, is about how Seattle still can’t get racial equality right in its school system. Seattle! So, we the church have something powerful, potentially transforming to offer. It’s critical for all who have seen and experienced and tasted God’s love and forgiveness! It’s imperative for God’s people—each of us!–to say to people we know and people we meet, “Come and see.”

For the first time in two weeks, I picked up a newspaper when I arrived home this past Friday. One of the first articles I read was the story about the President of the United States calling nations, and especially certain poor nations, a name that I shall not repeat, but a name that sounds a bit like “pit bull.”

As we have seen over the past year, the garbage that spews forth from the President of the United States on almost a daily basis has a powerful effect on individuals and on our society. It empowers people who do not represent the teachings and example of Jesus Christ. The language and attitudes of the most powerful people in our land encourage racism, sexism, selfishness and greed.

Although you might find it hard to believe, I say all this to you as a word of encouragement! At least, if you count yourselves as followers of Jesus I hope you’ll hear it as encouragement because friends, it is a really, really great time to be the church. Every age is a good time to be the church and there was a time that many of us remember when everybody went to church; it was the thing to do. The problem with that is that it wasn’t always easy to tell who were actually serious about following Jesus and who weren’t. But what other time besides today in recent history has offered the church an opportunity to boldly proclaim and live out an alternative to the degrading attitudes and behaviors that have become commonplace in our land?

I see this congregation as nothing less than a glimpse of the “kin”-dom—family–of God. I hope to God that you do, too! And if you do, as we begin this new year I pray that you will take to heart the example of Philip and find some opportunity to invite people in your world to “come and see”—to show skeptics, like Nathanael, that the church is not necessarily what you think it is.

Some of you already do this and I thank you! You invite others and some say, “No, thanks.” Or, you invite them, and they come, but they don’t stay. Not everyone chooses to be part of a church community; even fewer choose discipleship—it’s not an easy path! But some—including some of you who are here this morning—have been invited and have stayed, because you have come and seen for yourself a glimpse of God’s power and presence in the world, and in your own life.

To begin this new year, we who gather each Sunday morning remember who we are. We remember that we are first of all, God’s beloved people, no matter what. We are forgiven, no matter what. As followers of Jesus we in turn practice and extend that love and forgiveness to one another, and ultimately to the world God loves.

Many people feed on attitudes of fear, hate, and selfishness. But the world is also full of people who hunger for hope. Millions hunger for communities and relationships that strive to practice unconditional love and radical hospitality. It is these to whom each of us and all who choose to follow Jesus say, “Come and see!”

Click the link at the bottom of this page, or, friend us at our "GoWithGrace.org" Facebook page. … END_OF_DOCUMENT_TOKEN_TO_BE_REPLACED