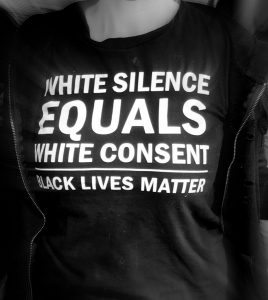 One of my friends told me this past week about an acquaintance who has been in anguish over the past weeks. This person has been agonizing not only about the death of George Floyd, but also about larger questions of racism in this country. She said, “I want to fight racism. I wish people of color would just tell me what to do!”

It’s hard to fault anyone’s sincere desire for racial justice. Many of us who are white have either made such statements ourselves or harbored unspoken attitudes in that direction.

What I have found, however—not just over the past weeks but over the past years—is that however sincere, the desire of white folks to be taught about race by people of color is nevertheless misguided. One statement I’ve heard both in person and in the news over and over again from people of color is, “We’re exhausted.” Maybe you’ve noticed that, too. Why are they exhausted? Because for many people of color the story of George Floyd is not just the latest headline news drama. It is the story of their lives.

I have another friend who is very clear about this. “I can’t do your work for you,” she says. “You white folks need to do your own work together.”

In today’s reading from Matthew, Jesus offers examples of what “doing the work” looks like: teaching, proclaiming, curing. And, Matthew writes, he had compassion for them, for they were “like sheep without a shepherd.”

Sheep are mentioned three times in this reading.  Out of this “flock of sheep” Jesus calls by name twelve who will become the core of his followers. And he says to these: Go nowhere among the Gentiles, and enter no town of the Samaritans, but go rather to the lost sheep of the house of Israel.

The word “Gentile” basically means, anyone who is not Jewish. So Jesus is saying to his fellow Jews, “There is so much work to be done. Focus on the transformation of yourself and your own people. Do your own spiritual work and,” he might’ve added, “don’t expect others to do it for you!” Then let the fruits of that spiritual work help others. There are plenty of “lost sheep” out there, afraid and confused.

Today’s reading from Matthew is a kind of road map for white America! And because this is Jesus speaking, those of us who enjoy privilege in our society might expect to feel at least a little uncomfortable along the way. You don’t get crucified for being nice, or for being religious, or for being silent. You get crucified for turning people’s world upside down.

Jesus does that. He demands the impossible. Cure the sick, raise the dead, cleanse the lepers, cast out demons.

Cure the sick? We can’t even get testing for COVID-19, let alone raise the dead! Cleanse the lepers?—forty years later, we still don’t even have an AIDS vaccine. Cast out demons? Say what you will about devils and demons, but a nation that willfully follows lies and liars is—if not under some demonic influence–at least like “sheep without a shepherd.” A nation that century after century clings to white supremacy certainly seems to be under some demonic influence.

Casting out the demons of others, however, is unlikely unless one’s own demons are confronted. The key to casting out one’s own demons is confession. But the dominant culture in our country—Christians included—willfully refuses to recognize and acknowledge systemic racism and injustice. Easier to blame a few “bad apples.”

But Jesus isn’t done with his marching orders. You received without payment; give without payment. Take no gold, or silver, or copper in your belts, no bag for your journey, or two tunics, or sandals, or a staff; for laborers deserve their food. Now he’s gone too far. He’s messing with our wealth and privilege, and the sense of entitlement that goes with it. But how can there be racial justice where people cling to material wealth as something we deserve?

He ends his list of instructions with a sobering warning about persecution, betrayal, and being sent out “like sheep into the midst of wolves.” Duly noted!

Before all that, however, he touches on one of our biggest challenges: Mustering the courage to speak out even while knowing the likelihood of rejection. In terms of those you meet with your gospel message of love, he says, If the house is worthy, let your peace come upon it; but if it is not worthy, let your peace return to you. If anyone will not welcome you or listen to your words, shake off the dust from your feet as you leave that house or town.

If racism is our national sin. If racism remains firmly rooted even after 400 years. If white America continues to deny this truth. If we continue to keep white supremacy firmly in place. If even people of faith are more committed to personal privilege and “peace at any price” or “law and order” than we are to God’s word. If we are more devoted to love of country than we are to love of brothers and sisters created in the image of God. If this is who we are as a nation, then white Christians who believe deeply that Black Lives Matter can surely expect the rejection that Jesus promises.

Experiencing rejection is not a sin. But, silence in the face of evil is a sin. The white Christian who is silent in the face of lies, brutality, and injustice is not hearing clearly the call to discipleship. The white Christian who is worried a bit too much about offending friends or family or other members of the church are making a choice about what’s most important to them. Jesus says to those who are rejected, “Don’t dwell on it. Knock the dust off your shoes and move on!  There are people more deserving of your gifts and energy, and they will listen.”

Dear white folks, you and I need to do our own work. The times in which we live are a window of opportunity.  We don’t need to further exhaust our sisters and brothers of color.  We need to do our own work together.  Which is to say: The God who loves all people equally and unconditionally needs us to embark on a lifelong journey…of hearts and minds transformed!

Click the link at the bottom of this page, or, friend us at our "GoWithGrace.org" Facebook page. … END_OF_DOCUMENT_TOKEN_TO_BE_REPLACED