It is good to be with you this morning! I am honored to be asked by Pr. Priscilla to be with you today. Some of you know Pr. Rick Pribbernow of Open Door Ministries. Pr. Rick is a member of my congregation and is preaching for me today. He asked me to send you his greetings.

I’d like to share with you this morning a quote from Thomas Keating. Fr. Thomas Keating is a teacher of centering prayer, which you may have heard of and some of you may even practice. You can follow along on the hand-out if you like. 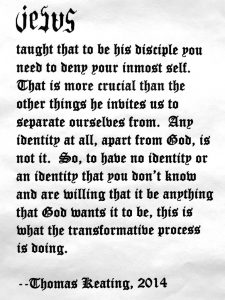 This teaching for me gets at the essence of Christian faith. Who is Jesus? He is the one who cuts through all the distractions and false identities that I embrace, leading me to the God who loves not just me but all people, no matter what.

Now I’d like you to turn that hand-out upside down. The words become a jumble of unreadable, nonsensical symbols. Except–look at the bottom of the page. Who knew that with a certain font the name “Jesus” upside down becomes “Satan”! Some might find this offensive. 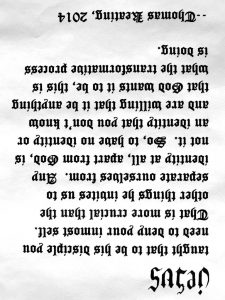 This little “game” for me summarizes what’s going on in today’s readings.

It’s Homecoming Weekend for Jesus and it’s clear from the story that the hometown crowd are conflicted. On the one hand, they are convinced that they know who Jesus is. This is Joseph the carpenter’s son, who is just one of many siblings, whom they also know. By the way, and don’t forget, this hometown boy was born out of wedlock—a significant demerit both then and now. But on that particular day this one they thought they knew turned their assumptions upside down. Mark tells us that they were “astounded.” Where did this man get all this? What is this wisdom that has been given to him? What deeds of power are being done by his hands! It seems to be building to some kind of Super Bowl champion parade—but then, it all comes crashing down with these words: And they took offense at him.

What’s going on here? How did we go from wonder to condemnation? How did we get from Palm Sunday to Good Friday…in a heartbeat? Another way to ask it: With such evidence of God’s presence and power in Jesus, how did the hometown crowd fail to see Jesus for who he was, and to see only what offended them?

One answer to that question can be found in our reading from 2 Samuel. David occupied the stronghold, and named it the city of David. (Such a humble guy!) David built the city all around from the Millo inward. And David became greater and greater, for the Lord, the God of hosts, was with him.

David, David, David! It’s not clear who exactly is being worshiped! Is it God, or is it David? For the people of Israel, King David represented the good old days of glory. In fact, their religious story was built on hope for fulfillment of a national glory story. Salvation for them was not some pie-in-the-sky afterlife, but the return of a Messiah, a king like David who would deliver them. Notice that the author of 2 Samuel has completely bought into this story—hook, line and sinker!

This mixing of religious and national identities was so entrenched for the people of Israel that a thousand years after King David, the people of Jesus’ day still clung to an unshakeable faith in this national glory story. So–Jesus could teach all the wisdom he wanted. He could heal all the people he saw. He could perform all the miracles he could manage. It wouldn’t matter, because Jesus was no King David! They knew Jesus and they knew their salvation story, and the two didn’t add up. The idea of Jesus as Messiah was, as Mark reports, “offensive” to them.

Two thousand years later the idea of Jesus as Messiah is still offensive. Many among the religious people of Israel still cling to this 3000-year-old story of national glory, still looking for a conquering hero. But it’s not just them. In fact, how are we American Christians any different? On this Sunday after our highest national holiday, it might be a good time to ask what myths and stories we’ve embraced that blind us to the Messiah right under our noses.

Fr. Keating reminds us that Jesus said that to be his disciple we need to deny our inmost self: “So, to have no identity or an identity that you don’t know and are willing that it be anything that God wants it to be, this is what the transformative process is doing.”

I want to be clear that when we speak of setting aside identity, what we’re talking about here is privilege and power. Countless folks through history and around the world today have been stripped of power and dignity, their identity ridiculed and dismissed. If you’re a person of color or a sexual minority or undocumented immigrant, you probably have some experience of this. No, what Fr. Keating speaks of–what Jesus spoke of when he called for followers to deny ourselves–is to sweep aside those self-interested glory stories that keep us from seeing the Messiah among us.

Go to a game at CenturyLink field sometime (or Safeco Field) and see an example of what this 3000 year-old worship of glory looks like in our time. I did last fall. This isn’t just a football game; it’s a worship service! Cheering the hometown team, you will find nationalism, sports heroes, military power—and God!–mooshed together so tightly around power and glory that you can’t tell one from the other. And, if you fail to stand for the sacred song, you will discover that in our stories of national glory, white privilege is an essential part of the mix.

It’s all a question of identity. When we allow our faith stories to be shaped by national stories, like God’s people over thousands of years in the past until the present day, we will see the gospel “upside down.” We will be more likely to see what offends our preference for a national story, less likely to see the presence and power of the Living Christ—the one we thought we knew–the incredible, life-giving gift, right under our noses.

When our faith rests in familiar, safe, and self-interested stories about who Jesus is; when we allow our national myths of glory to shape our hearts and minds, we will make choices in our personal and civic lives that reflect that self-interest. Recently, for example, a pastor friend told me that she knew of a couple of people in her congregation who had voted for Donald Trump in the 2016 election. Within a year after the election, having seen the ongoing catastrophe that continues to unfold before our eyes, they approached her and said, “What were we thinking??”

Such a good question! I share this story of those two souls not to mock or ridicule them. On the contrary, I share it as a reason for hope. Those two parishioners—like the people of Jesus’ day–had fully invested in a faith based on their national stories of glory–as the writer of 2 Samuel puts it, Make King David great again! (Make America great again!)–but later concluded that their choice didn’t line up with their faith in Jesus.

As our readings today show, this is an ancient problem for people of faith, a story replayed in every generation. It’s a problem of God’s people forgetting who we are and whose we are. It’s a danger that all of us face. We Christians, we church-going folk, are very much part of the hometown crowd seduced by the power of a national story, and offended by Jesus.

But, as I said, I am hopeful! The quote by Fr. Keating that we read a few minutes ago describes what he calls the transformative process, which is what Christian faith is all about. Stories like the one I just shared in which two parishioners asked, “What were we thinking?” are powerful examples of the beginning of such transformation.

The beginning of transformation—as John the Baptist preached, and as Jesus preaches in today’s reading—begins with repentance. This is not a “Sorry I said/did/thought bad things” sort of repentance. Neither is it a repentance built on guilt and shame. The original Biblical word for repentance means “turning in a new direction.” Repentance is a response to God’s love and mercy that leads to turning in a new life direction.

Not everyone will embrace an alternative to national glory stories and other false identities to which they’re attached. By definition, our Christian story is offensive to stories of glory grounded in nationalism, which are about exclusion, not inclusion.

In today’s reading Jesus advises his disciples that when (not if) we meet resistance and rejection, don’t worry about it! Our national leaders and those who enable them may be wandering quite far from the Kingdom of God, but you—shake the dust off your shoes and…move on! The true Messiah is no King David. He offers you who have ears to hear a different identity and a different story. It’s the work of offering sanctuary to the persecuted, reuniting immigrant families, unlearning white privilege, speaking forcefully and working courageously in support of any who lack food, shelter, heath care and dignity—work of hope and healing that mirrors the compassion and inclusion that Jesus practiced.

So, which story do you choose? The God of love is right under our noses. The Jesus we think we know…is full of surprises!

Click the link at the bottom of this page, or, friend us at our "GoWithGrace.org" Facebook page. … END_OF_DOCUMENT_TOKEN_TO_BE_REPLACED