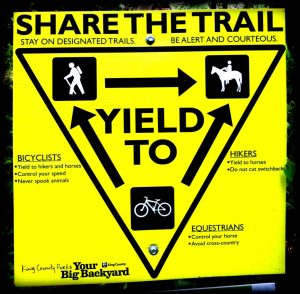 Finally, brothers and sisters…Put things in order,…agree with one another, live in peace; and the God of love and peace will be with you. Greet one another with a holy kiss. All the saints greet you. The grace of the Lord Jesus Christ, the love of God, and the communion of the Holy Spirit be with all of you.

My wife and I were enjoying a hike this past week when we came across a sign. This trail sign isn’t unusual, but the triangle caught my attention because this week I’ve been preparing for today, which in the Lutheran Church is Holy Trinity Sunday.

Many of you are aware that the Trinity of which we speak is a name for the Christian God. Traditionally this has been known as Father, Son & Holy Spirit. Other more inclusive descriptions include Creator, Redeemer and Spirit. The doctrine of the Trinity affirms a mystery. God is not one but three. And yet, the three are one.

To me, this used to sound like just stuffy theology, with little practical value. Over time, however, I’ve developed a growing appreciation for the Holy Trinity, not as doctrine. Instead, it’s a model for the community that followers of Jesus Christ are to learn from and imitate. The Holy Trinity is the very epitome of perfect, self-giving love.

But even though love is the bedrock of Christian faith, the Holy Trinity is not often the one from whom we take our cue. When we think of an ordered community, we Americans are inclined to think of democracy as the highest value, where the majority rules. For example, in any community of three, we would expect that two out of three votes would determine any decision.

The Holy Trinity, however, is not a democracy. It’s three separate and very diverse entities in such a perfect relationship of love that they act as one. This is the example we’re to learn from.

The values of our culture more closely resemble a “monopod,” in which the individual is the first priority—at least, if you’re an individual of the dominant culture. We see evidence of this all around us. We see it in the merely self-centered, such as people who won’t wear masks in public because “Nobody tells me what to do.”

We see it not just in the selfish, but in the dangerous and deadly, such as white supremacy. White supremacy is a cancer that has been allowed to insert itself into the lives of all of us, and into every corner of our life together as a nation. But, the monopod—the individual entity only—on its own, always fails. Morally. Spiritually. It fails. As our biblical creation story describes order and chaos, the individual reigning supreme is a symptom of anarchy or chaos.

On the face of it, the “duopod” seems like an improvement but it’s not much better. This could be a couple who makes a life together without the blessing and support of a community. But two only, just as with one only, can turn deadly. On this commemoration day for Chief Sealth, we remember that it was white people (1) invoking the name of God (2)—”manifest destiny”–that justified centuries of slavery and genocide against people of color. In the end, the duopod always fails. Morally. Spiritually. It fails. The duopod strives for order and control, but it, too, is a symptom of chaos.

Three, however, is a powerful number. The tripod forms a solid base. But it’s not some random group of three—not three of my group or my choice. The Holy Trinity is a very diverse group of three bound together in perfect, self-giving love.

So, back to the trail sign. This is what caught my attention—the self-giving, or, “yielding to.” On the trail, bikes yield to hikers and horses. People yield to horses. This sign, obviously, is not a perfect example. It’s certainly not the Holy Trinity where every member yields to every other member. It does, though, hint at the power of the Holy Trinity through yielding one’s own will.

One of the most crucial forms of yielding in human life is the willingness to listen. But listening, as you may have noticed, is in short supply these days—well, and has been for a long time. Many people in power demonstrate a nearly complete lack of listening power—which is to say, an absence of spiritual power.  The refusal to listen and the need to control always lead eventually to chaos.

The creation story begins with chaos and moves toward order. This theme is picked up in 2 Corinthians, when St. Paul commands the church to “put things in order.” Now, we might imagine order as some sort of hierarchy: Top, middle, bottom.  Putting things in order for followers of Christ means following the very example of God, the Holy Trinity. Perfect, self-giving love is the example and base upon which we are called to actively build a life, a community, and a world.

Dear friends, it really does matter who we follow. So put things in order. Following human selfishness leads to chaos. In our own time, following the example of the Holy Trinity, in which white, people of color, and the living God work toward self-giving love comes with a promise. St. Paul puts it in plain language: Put things in order,…agree with one another, live in peace; and the God of love and peace will be with you!

Click the link at the bottom of this page, or, friend us at our "GoWithGrace.org" Facebook page. … END_OF_DOCUMENT_TOKEN_TO_BE_REPLACED